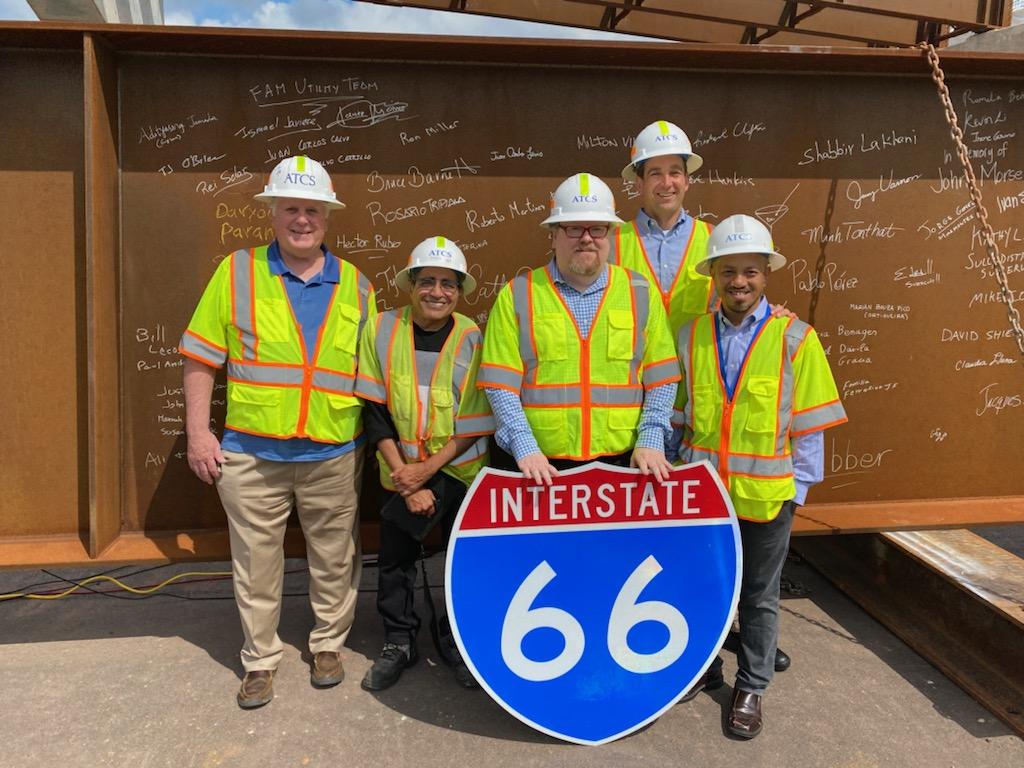 The Transform 66 project team marked a milestone on Monday, Aug. 22, with a ceremonial signing of the last beam to be installed at the I-66/Route 28 Interchange. ATCS staff joined VDOT Northern Virginia leadership, project concessionaire I-66 Express Mobility Partners, project design-builder FAM Construction, and elected officials to add their names to the beam, which was installed that night.

Although much of the public focus on the $3.7 billion public-private partnership is on the 22.5 miles of Express Lanes, the project has rebuilt the Route 28 interchange and removed four sets of traffic signals, enabling “signal-free” travel on more than 15 miles of Route 28 from Route 7 in Sterling to the south of the Route 28/Route 29 interchange in Centreville.

In her remarks recognizing the contributions of project staff from the VDOT/GEC team, VDOT Megaprojects Director Susan Shaw also recognized the leadership and loss of John Morse, who had led the consulting team support for the project since 2016. Susan added his name to the beam.

The 66 Express Lanes are scheduled to open by December 2022, with project work continuing through 2023.

Do you have questions about our Company or Service offerings?

ATCS is looking forward to welcoming our 2023 interns! The planning and summer itinerary are well underway. Head over to... our website to apply now! 🔗 https://t.co/d9IEpwr8gg

Are you attending the #MDQI Conference this week in Baltimore, MD? Stop by Exhibitor Booth #111 to meet our ATCS team! ... We look forward to connecting with you.

Did you know 2023 is the year of the Rabbit in Chinese culture? To all who are celebrating, we wish you a peaceful and ... prosperous Lunar New Year.